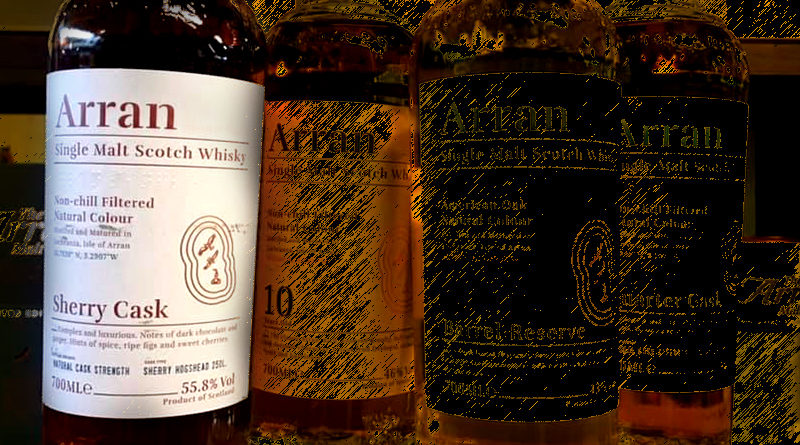 First of all, I’d like to start by explaining why I didn’t post squad for about a month. For those who know me, it wasn’t because of depression caused by the demise of quality Star Wars. Yes, The Rise of Skywalker sucked only slightly less than The last Jedi, but Disney did give us the Mandalorian, so I do have some small hope left there is more good stuff to come.

It was simpler: I had a severe case of the flue. Not man flue, proper flue. The one that deprives you of the sense of taste and smell. And let’s face it, that’s pretty essential when doing the legwork for a blog about quality beverages.

Anyway, time to go back to tasting. And Arran has always been a favourite of mine. Perhaps because I started to get serious about single malt whisky by the time they got founded. Following them from the beginning was a joy, I remember feeling it was promising from the beginning but the first time the 10-year-old hit the shelves I remember thinking I could not wait before that spirit hit twentysomething.

It has now, and some brilliant stuff has resulted. Of course, now I can’t wait until they hit their thirties. But that does not mean it has to be old to be good. In fact, this new ‘sherry cask’ from their core range is about 7 years of age.

Not that it was on the bottle, it took me some research to get that number. So, it’s officially NAS or No Age Statement, something I tend to not like. Also, it comes in the new Arran core packaging, which is something I most definitely don’t like. In fact, I teach graphic design classes, and this would not have scored that high.

But in the end it’s all about what’s inside, and I would give the dram a fair taste even if it wasn’t from one of my favourite distilleries. So, Werner Van den Nouwelant was kind enough to assist me and this is what we came up with.

Loads of red berries. Herbs and spices in a nice way, with nutmeg being the most prominent. The sherry is definitely present. Some apple to top it all off. For the Scots, the latter is exotic fruit I’ve been told.

Still all those red berries and if anything, the sherry gets more prominent. Apple and pear, raisins and some light peppers. A creamy, sticky mouthfeel. Kind of like very light honey. The feel of it, not the taste. Although there’s probably a hint of that too.

Pepper leaps to the front, supported by nutmeg. The berries, apple and pear are still there though. A warm feeling with some elements of licorice. It does not exactly lose the sherry influence either.

I’m not a fan of the NAS principle, although I should probably give them a pass since the info is there to be found on the net at least. Fact is, this is a very good whisky, and you would give it quite a few more years than seven if you tasted it blind. More like 14 to 16. I thought smaller casks for a while, but it was a hogshead

It’s not the best look for a bottle, but as always Arran does not disappoint taste wise. This is a must try if you like the sherry profile and want some bang for your buck.

This whisky reminds me of: Romelu Lukaku (when he was 16)

Looked too old and big for 16 but loads of power and talent even at that age.