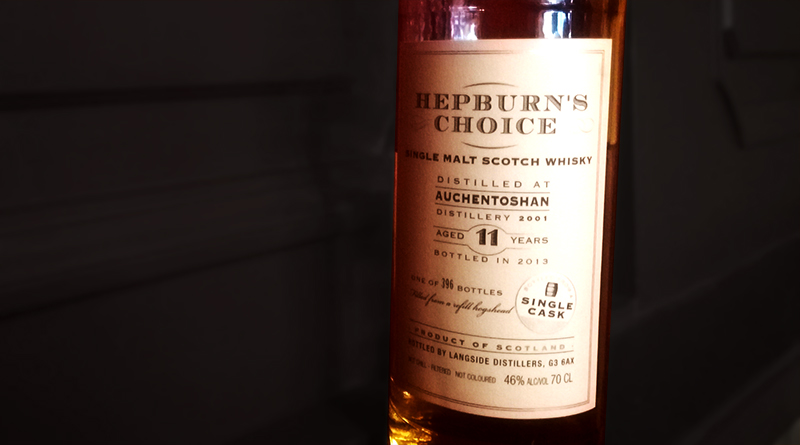 There aren’t that many Single Malt distilleries in the Lowlands, but Auchentoshan nevertheless is pretty well known. Well known for its triple distilled whisky (normally more of an Irish thing) and a name not everyone can pronounce. Rumour has it the Scots like to give their whisky difficult Gaelic names just to piss of the English. As the Scots like pissing of the English this theory probably has some merit.

Hepburn’s Choice was created as a brand that provides ‘bang for your buck’ whiskies: Quality single Malt for an affordable price. Let’s see if this is indeed quality.

I originally tasted this with The Whisky Mercenary Jürgen Vromans in 2013 for the old Dutch blog. I still had half a bottle of this lying around for a retaste and I found the retaste to be consistent with my old notes, but perhaps a bit better than I remembered. And I did not think it was too bad back then either.

Lemon, Fruitella sweets (orange), licorice, white pepper, sweet apple, light smoke. The smoke must come from the wood, normally this is not a peated whisky. A promising nose for sure.

Fruitella, orange, sweet apple, white grape. A bit of grain as well but overall this is very fruity. Pleasant but lacks a bit of depth.

Fruitella, pepper, nutmeg, orange. Drying feeling from the grains and the wood influence. Similar to the Mouth but definitely with some added complexity.

This is a solid dram, with a decent taste. The nose and Finish are a bit more complex and lift it a bit above average. For sure this is value for your money, so mission accomplished I would say.

This has been reduced from cask strength to 46%. This makes it possible to keep a single cask or limited edition affordable: you have more bottles. However, 46% definitely still is a very nice drinking percentage that usually provides a richer experience than 40 or even 43 percent.

This whisky reminds me of: Gilles De Bilde

A Belgian Football international. Call it soccer and I will give you abuse Monty Python style. He started great, finished great but had a so-so mid-career. Talented but not overly bright.