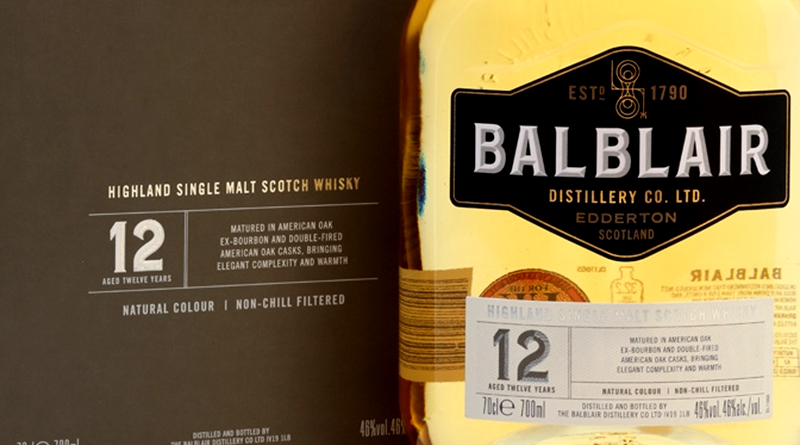 A few weeks ago, I did a review about an old Balblair expression. One that had both a vintage and an age statement. I mentioned they did purely vintage bottlings for a while, even with their core range, but that they recently made the switch to a more classic age statement core range.

You can speculate on the how and why. You can certainly be sad about the vintages no longer being there, I know I am. But in the end it’s what inside the bottle that matters most. And Balblair has been pretty consistent in delivering good quality whisky so far. Sure, no distillery is perfect, but a bad Balblair bottle is a lot harder to find than one that is at least decent. Most are at least good.

And of course, the looks also got a bit of an overhaul. The bottle itself still looks good and kind of builds on the previous core range. Including, I’m sad to say, the larger cork that makes it a disaster to use at tastings since no bottle pilot fits. But the box is pretty sand and bland compared to the previous version, which was one of the nicest boxes I’ve ever seen. And probably too expensive to make.

But back to what is in the bottle. This is the 12-year-old, considered the ‘entry level’ expression. That means it’s affordable, the youngest in the core range and should be an introduction to what Balblair as a malt stands for. I lured Werner Van den Nouwelant to my place for a tasting session. I’ll gladly share our findings with you.

Very fruity, both fresh and stewed. Apple, honey, raisin, and berries. Mainly cranberry but more than that. Some hints of citrus as well. Like I said, welcome to the candy shop. (But no, I won’t let you lick the lollypop)

Still very fruity. Apple still, but citrus evolved into a more clear orange. Still peppery, and still in a pleasing way. Eucalyptus all of a sudden. Bit of a surprise but it certainly is a welcome bonus. It’s also a pretty long finish for an entry level single malt. And that’s a good thing.

Well, this certainly did not disappoint at all. This is an excellent malt and most certainly an option to bring new people to the wonderful world of whisky enthusiasts. Still, don’t think for a second it will get boring, it has more than enough depth to please the more experienced malt lover. I was going to say maniac but that might be trademarked. It certainly helps it’s bottled at 46% which more and more is becoming a standard among the smaller distilleries. And again, that’s a good thing.

So yes, while I’m a bit sad about the new marketing direction, I’m glad at least the quality of the whisky is obviously still the main focus at Balblair distillery. This bottle will most likely be in my cabinet as a daily dram a few times before they perform the next marketing facelift.

This whisky reminds me of: Dennis Praet

A bit young still but consistent quality. And I forgot his vintage.