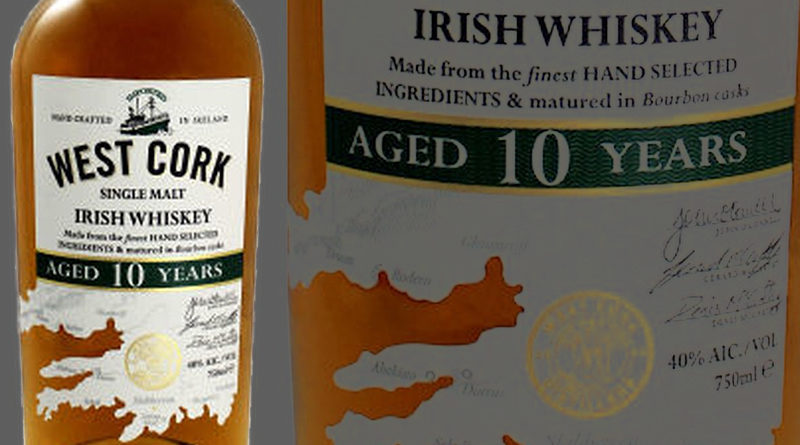 Whisky is booming, In Scotland, the rest of the world, and also in Ireland. Before prohibition Irish Whiskey was at least on par with Scotch, but for a long time only a few players were left.

Now however we see more and more new distilleries, and West Cork is one of them. They are relatively new and were founded in 2003. They moved to their current larger location in 2014 and will be opening their visitor center in 2020.

When you want to get to know a distillery you usually go to the core expression. More often than not it’s a 10 year old. However you should keep in mind that one was still made partly on their old location, and from what we hear also partly in a larger Irish distillery that shall remain undisclosed. After all we can’t be sure, can we.

Does it matter though? As long as the product reflects the filosophy and ideals of it’s makers? In the end it’s all about the taste, so let’s taste this.

Vanilla, orange and other citrus notes. Green apple and some grains. A bit floral, but not in a bad way. Promising and smells a bit like a mix of classic fruity Irish and prime bourbons.

Orange, green apple and cherry. Fresh and fruity like we like our Irish Whiskey. Also some grains and vanilla, and a nice touch of honey. This puts a smile on our face.

Yeast and pepper. Vanilla, orange, honey and mocha. So still fruity, but a lot more hearty. And still pretty pleasing. Medium long but plenty of power.

Yeh, this is a pretty good dram. Also dangerously drinkeable at the minimum strength of 40%. It’s matured in first fill bourbon barrels from Maker’s Mark and Wild Turkey, and it shows in the powefull vanilla notes. It’s also triple distilled which explains the light and fruity character.

All in all this distillery seems to be a welcome addition to the once again booming Irish Whiskey scene.

This whisky reminds me of: Aidan Gillen

Can talk all honey, but pack a peppery punch when needed. Greatly tallented.