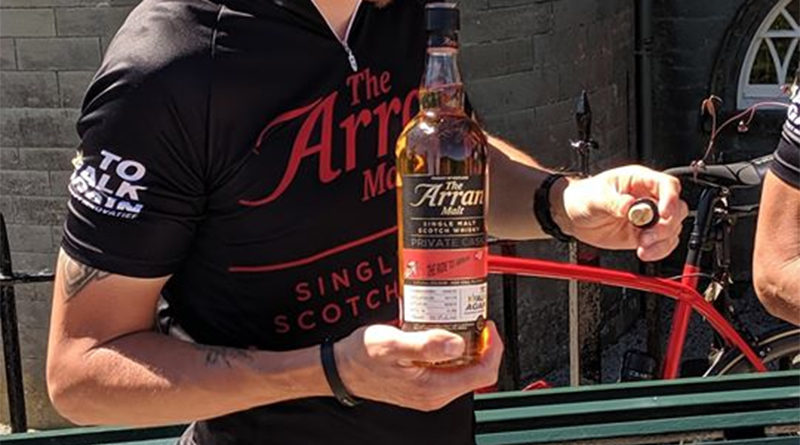 People who follow this blog and or know me are aware I’m a fan of Arran Distillery. Some of you also know Jan Vissers, who among others is the Arran Brand Ambassador for Belgium, is a friend.

A few years ago, Jan had a horrid accident. To this day he is wrestling with his injuries as a result, and in constant pain, but he’s not the person to give up. He took up cycling again and keeps improving at it, giving a big middle finger to the cards life dealt him in the progress. In a good way.

One charity that meant a lot during his recovery is “To walk again”. I’m not going to tell you too much about it, but it was founded by former world class Triathlon Athlete Marc Herremans who, after an accident ended up in a wheelchair but never gave up and is now helping other people in similar situations to do the same. If you can read Dutch or trust Google translate, you can check out their website over here.

Anyway, for a few years now, Jan organises a cycling event called the ‘Ride to Arran’. In 2019 he alongside a few whisky friends rode all the way from Westerlo, Belgium to Arran in stages, ending over there while the Arran festival started. And of course, that deserved a special single cask bottling.

Werner van den Nouwelant and I really don’t like cycling as a sport, but we sure like Arran and tasting whisky. So, let’s get to the tastenotes shall we?

Nose:
Very fresh and fruity. Mostly berries and citrus. Also, some nice peppers and nutmeg. Quite a bit of power and well balanced. So far so good.

Still those fresh fruity tones, again the berries on the forefront. Citrus is also still present, along with some nice peach tones. A hint of pepper remains, and definitely a touch of honey. A pleasant creamy texture really keeps it all together.

Well I could copy paste quite a bit. Still fruity, still peach, berries and citrus. But it gets a bit more tropical, and we did get some lychee for sure. The honey is still around as well, and the pepper tones get a bit more pronounced again. The result is a slightly drier sensation, but it lingers on as long as you expect from a cast strength whisky.

This whisky is an excellent advocate for the Arran Distillery, and yet another argument for me to present if people ask why I’m such a fan of the distillery. Does that mean I never had a bad Arran? I wish, but I thought the first Smuggler’s was a massive disappointment. Nobody is perfect.

I don’t know if you can still find this bottle, but I’m pretty sure you can expect more great Arran Selections for this yearly event in the future.

This whisky reminds me of: Marc Herremans

Marc Herremans of course. Full of talent and power and does not give up on you.

The whiskey: Arran private cast “The ride to Arran”