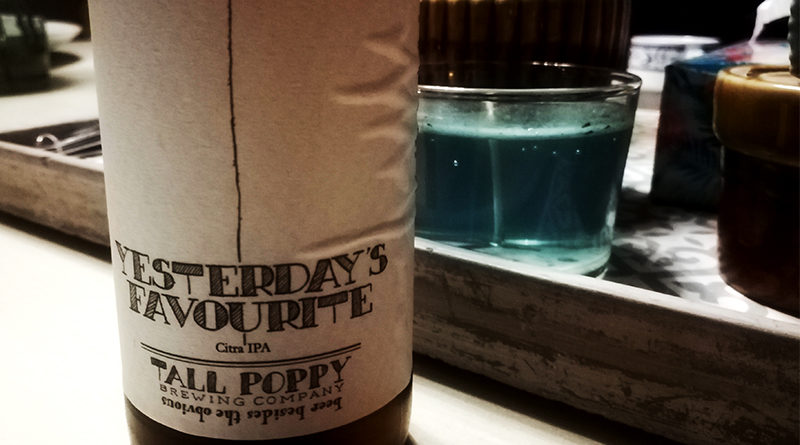 Tall Poppy Brewery is a Brewery in Edegem, Belgium. Like a lot of smaller breweries, they started out as a hobby project that had enough passion to evolve in a full-blown brewery. And like most of those, they stay true to their passion and mix tradition and quality with innovation.

This beer however is a bit less about innovation and more about Nostalgia. The title is a dead giveaway. Although it’s kind of short-term memory nostalgia as this beer is a throwback to the time Citra IPA’s were all the craze. And let’s face it, that wasn’t exactly ages ago. That also makes it a bit of a jab to the whole ‘flavour of the month’ mentality that is creeping into at least part of the beer lover’s community. They get extra points for that.

Also, extra points for their graphic design: a nice and consistent label concept. Sorry about the designer in me waking up again, but hey this is my blog I can write what I want.

I know I usually taste beers with Werner, but I do have other friends that are passionate about quality alcohol. For this tasting session I acquired written permission from his lovely wife Andrea and enlisted Pauwel Cornelissen. He has been a whisky and beer buddy of mine for a good few years, and a good friend. He also is a hobby brewer so he should be able to assist me with these tastenotes.

Malt and mocha. Butterscotch and candy sugar. Also, some green herbs, mainly oregano. I was expecting more fruity notes, but what we got was still very pleasant and balanced. Give it a minute as well, it gains in power over time.

Very full and creamy. Still some caramel and coffee influences, but also the fruity and bitter notes you would expect from a Citra IPA. Loads of power for a relatively low alcohol percentage.

The green herbs are back, coffee and caramel seem a constant throughout the experience. A bitter and long finish, with some lingering fruity notes. Again, well balanced and pleasant. Again, plenty of power.

This is very good, although not 100% what we expected. At times it feels like a crossover between IPA and Stout, due to the coffee notes. It also has a powerful taste and quite the heavy texture. But I still get the homage part to the Citra IPA’s of (not so) yonder.

It’s a one off and sold out at the brewery but can be found at some stores still. So, grab ‘m while you can.

This beer reminds me of: Kristen Stewart

Yesterday’s craze, star is dwindling but she can be great. Specially in roles where she isn’t typecast like playing Joan Jett in “The Runaways”.