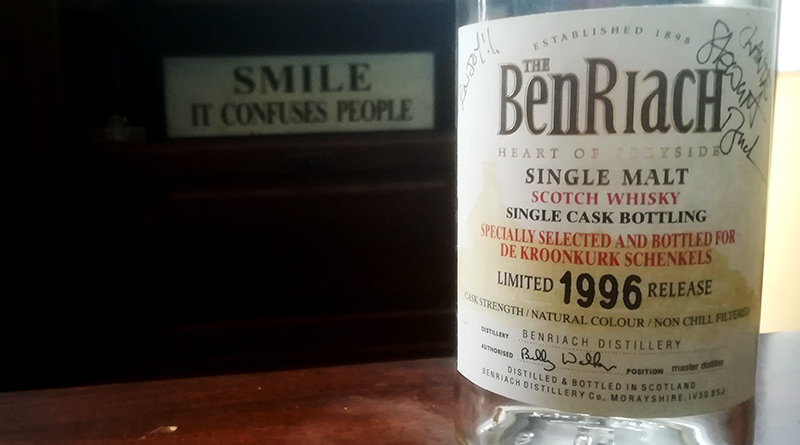 The Benriach distillery has been around since 1897, but Benriach single malt has only been in the picture since 2004, when Billy Walker took over the distillery. Before that it had been mothballed for 2 years. It also was closed between 1900 and 1965 but that’s less relevant for current stock.

Before that, Benriach was mostly (if ever) found as a single malt by independent bottlers. That also has changed dramatically since Walker has taken over. Not only do they hardly ever sell stock to independents, Billy actually made an effort to buy back any barrel of Benriach from brokers and independents he could get his hands on.

That does not mean another firm can’t bottle Benriach (or Glendronach for that matter), but it will typically have to be with a Benriach distillery label specially made for these kinds of occasions. As is the case with this expression bottled for the ‘Kroonkurk’, a modest but cool liquor store in my hometown of Turnhout, Belgium.

This was a single cask bottled in 2012 and distilled in 1996. It’s near impossible to find these days, so you might wonder why I’m doing a review now. Or rather, a re-review since I did it for the original Dutch site when it first was in stores.

There are a few reasons. First of all, because I can and feel like it. As good of a reason as any. I think every time someone feels like writing about something they should go ahead and do so. Writing is cool.

Also, I’ve seen this bottle on auction sites once or twice, so it’s still marginally relevant.

But mostly, since this was a virgin oak bottling long before virgin oak became a thing for Scotch. Benriach did it for a few select single casks, and other than that pretty much only Compas Box was using virgin oak. Now that it’s becoming more and more of a thing, I figured it would be cool to do a retaste of the last sample I had in my closet.

That brings me to another tip: when a bottle is 20% or less, it’s usually a good idea to either drink it or poor it in a smaller bottle or some sample bottles, as at that point the air really starts to be an influence if you keep it that way too long. Mind you, sometimes that air actually can improve on the whisky, but you never know in advance.

I did the original tasting along with Werner Van den Nouwelant and The Whisky Mercenary Jürgen Vromans. As this was really good I got selfish and did the retaste on my own.

Vanilla, sweet barley, pepper, marzipan, banana, pear. Very sweet indeed and loses some of the complexity of the nose. Great taste though, balanced and reminds you a bit of a high-end bourbon. Since they are virgin oak by default probably not that big of a shock.

Vanilla, sweet barley, pepper, banana, orange, mandarin, pineapple, cookies. Yeh, pretty much consistent with the mouth. Vanilla is pretty prominent throughout the experience, again to be expected from a virgin oak cask. But it works. Very well.

So yeah, this was an awesome whisky. Sad it’s gone now, but a testament to what virgin oak can be when done right. And also, a testament to Billy Walker and most of all to single cask whisky.

I would in fact love to hear your own experiences with single cask whisky, and your opinion on the use of virgin oak. Which distillery or spirit would really work with those you think? Feel free to leave a comment.

This whisky reminds me of: Monique Van de Ven

Released by: Benriach for the Kroonkurk