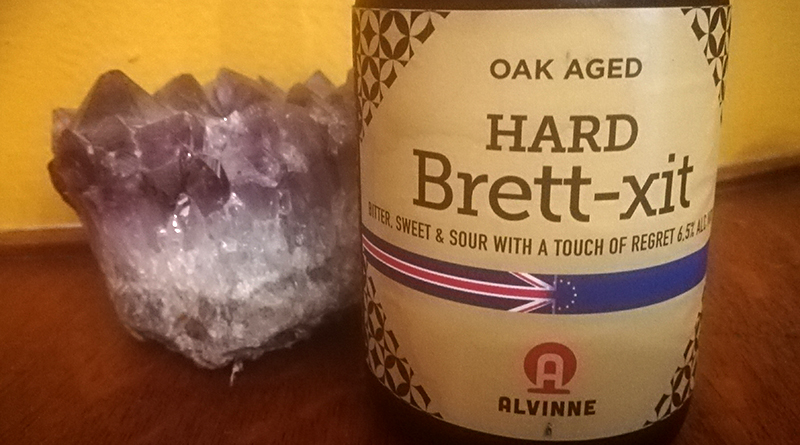 Quite a few brewers in Belgium make sour beer, but Alvinne brewery is very well known for them. And they should be, as they take their time making their beers, using wooden barrels to age them. They also only use 100% real fruit and their own unique Morpheus Yeast. They make tradition sexy with their motto: dare to go wild.

You got to hand it to craft brewers: they do put effort in naming their beers. And with uncle Boris going in overdrive, it sure seemed a good time to write tastenotes on this particular one. Especially since the tagline reads ‘bitter, sweet and sour with a touch of regret.

I’ve tasted this with Werner Van den Nouwelant. Full disclosure: the both of us are not really fans of sour beers (like Kriek and Lambic). However, that does not mean we don’t know when one is well made or not. And we can still appreciate the good ones.

Having said that, it’s time to get tasting this one.

Acid, fruity, strawberry, cherries, licorice, wood. Sweet and sour candy. You know the one that made you pull silly faces as a kid. Not bad, and certainly complex. But then again I never minded the sour in the smell, it’s the taste I always need to get through.

Well, there’s the sweet and sour candy again. But not much else. A bit watery to be honest. That does make the sourness manageable for us, but as complexity goes it’s a serious let down after that nose.

But it does come back a bit as soon as you swallow. Sourness is carried by lemon and lime, with a bit of licorice again. All of a sudden it finds the freshness the mouth lacked. And it certainly quenches your thirst.

This is by no means a great beer, and that conclusion has nothing to do with us being not great fans of the style. The nose is great actually, and the finish more than decent, but the actual drinking part is a disappointment. Kind of like Boris really.

Yes, the sourness is manageable, and the finish makes it ok to drink. But if you really want to enjoy it concentrate on smelling it. It’ll last longer that way too, so it can turn out to be a cheap drink after all.

Fun fact though: we tried it again in small portions in a Port Glass, and that was very beneficial. This makes us feel this is actually better as an appetizer drink instead of a beer. You know, instead of a glass of Champagne before the meal.

In the end, there’s better sour out there, a good portion of them actually made by Alvinne. So, we kind of have a feeling this one was not their best effort, which is actually why they branded it as a gimmick. We could be wrong though, perhaps they really did like it themselves.

This Beer reminds me of: Theresa May

Promised a lot. Did not deliver and turned out to be an aperitif to Boris.