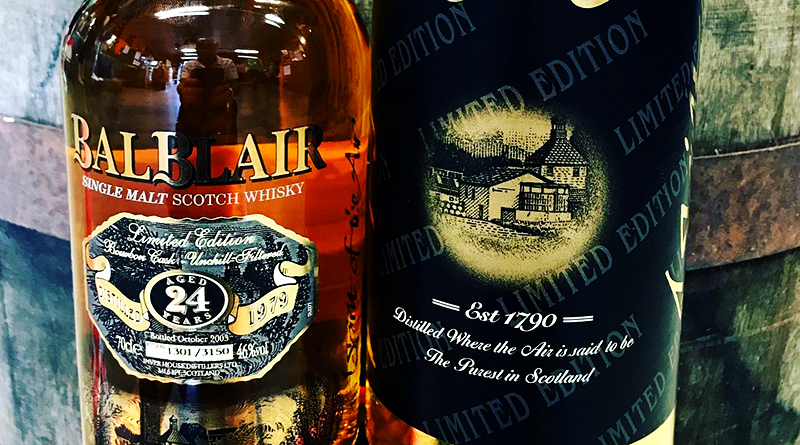 Balblair distillery has been one of my favourites for a good while now. Not only is it one of the most beautiful distilleries (Check a movie called The Angel’s share for an impression), it makes great whisky to boot. And I really liked the fact that until recently, even their core range was vintage based rather than the classic age statement.

Until recently, because they decided to do away with all that and revamp their entry level range to a more classic age statement series. No more vintages, and that’s too bad. I liked them, and furthermore there was no reason not to do both. In fact, before the vintages they did exactly that: do both.

The fun part is you can still get some of those old school Balblairs. They are a regular on auction sites and usually for some reason go for affordable prices. Although let’s face it, affordable for whisky these days is a lot higher than it used to be.

Back on the old Flemish blog, we did one of these old school Balblairs: a 24-year-old we found on some dusty shelf in an old liquor store. It was during a whisky scavenge trip I was on with the Whisky Mercenary Jürgen Vromans and we grabbed the last 3 bottles available. This is why you visit the old funky stores people, you never know what treasures lie within.

Anyway, Werner Van den Nouwelant joined us for a tasting session and we, to use an understatement, rather enjoyed this one. I recently got my hands on a sample for a retaste, and like I said this is something you can still find if you really look for it.

Sweet barley, pear, smoke, pepper, nuts, citrus, cashew nuts, vanilla, minerals, caramel, cherry, orange. Yeh, that’s a lot of depth and variation. All good Balblairs have a spectacular nose so it was to be expected. But that didn’t mean we enjoyed it any less.

Apple, pear, nuts, minerals, orange, cherry. Some grainy elements. Less complex than the nose but the flavours that stick around are balanced yet powerful. So far so very good.

Apple, pear, nuts, pepper, orange, smoke, cherry, vanilla, minerals, chestnut, cookie dough. Back to being complex, keeps the power and the balance. A very warming feeling, even though the alcohol percentage is not that high. But we said warming, not burning. There’s a difference: the burn is that thing you don’t get anymore once you get used to drinking spirits. You know, that sensation that used to cause you to make a ‘toothless old man face’?

Oh yes, I certainly did a happy dance when I got my hands on another sample of this. It was a bottle that brought some fond memories and it was every bit as good as I remembered.

I need to get more Balblair, and I promise a review of the new core range in the near future. I realize I’ve been doing a lot of ‘older’ whisky and not enough recent stuff. Now that winter is coming (and not in a disappointing season 8 of Game of Thrones way) I’ll be doing more whisky tasting sessions again. And I have some other spirits lined up as well, like rum and Armagnac.

In the meantime, look out for stuff like this though. It’s worth the hunt.

This whisky reminds me of: Teri Hatcher