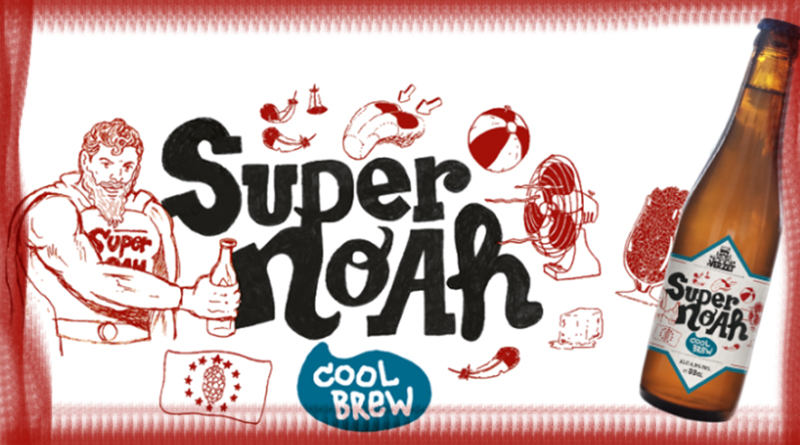 The great thing about the beer surge is that a lot of breweries with what can only be described as personality hit the scene. Brewery ‘t Verzet certainly is one of them. Incidentally, the most common meaning of that word in English is resistance, but in slang it could also mean ‘gear’ or ‘what was consumed’. So, it’s layered already. You know, like Ogres according to Shrek.

When you meet people from the brewery at festivals they sound very knowledgeable and just a little bit of the right kind of crazy. Come to think of it, a bit like Mike Myers who, you guess it, played Shrek. But the good part is that these people find the right mix between the rich Belgian beer tradition and the kind of innovations that requires thinking outside the box while still keeping the box in visual range.

We’ve tasted a few of their beers, and we liked every single one of them. But the one we like to share for this particular blogpost is called Super Noah. And with a name like that, we have high expectations. According to their website: NoAH stands for No American Hops and it’s a plea for Belgian Hops. They go on stating those hops were selected to give this beer a sturdy but pure bitterness and noble hop aroma.

Bold words, so The Whisky Mercenary Jürgen Vromans and myself wanted to put them to the test.

Earthy is the first word that comes to mind, with a pleasant sand and oyster mushroom mix. Hops and shortbread, nutmeg and a hint of citrus not unlike what you get from a typical saison style. Well, that’s a great start. Let’s drink.

The hops are still present but get a serious boost in fruity flavours. Mainly citrus and sour green apple. A bit of bitterness provides a nice contrast. Not overly complex but very balanced and pleasant to drink. This seems made for a hot day, but it works in every climate.

This is where this one really shines. Hops and citrus are now carried by pepper and nutmeg. Still bitter in a good way. And it lasts. Pretty long for a beer of what us Belgians call ‘lemonade strength’ (4.9% alcohol)

Yeh we like this a lot. It has elements of 2 of our favourite beer styles: saison and IPA. More importantly, it plays on the strong points of both which results in a pretty awesome beer. Come to think of it, there is some ‘triple’ elements in without the high alcohol percentage.

It’s the best of both worlds: easy drinking yet pretty complex. It quenches your thirst, but also your desire to have a good craft beer. We both are big fans, I take it this was obvious by now.

Like I said, they make a lot of great stuff, and we will most definitely write up tastenotes for more of them in the future.

And if you happen to live in or visit Belgium: they do brewery tours. You can book those on their website.

This Beer reminds me of: Cameron Diaz

Can be light or have a lot of depth. Fruity and fresh. Also, can be an Ogre. You know, with layers.