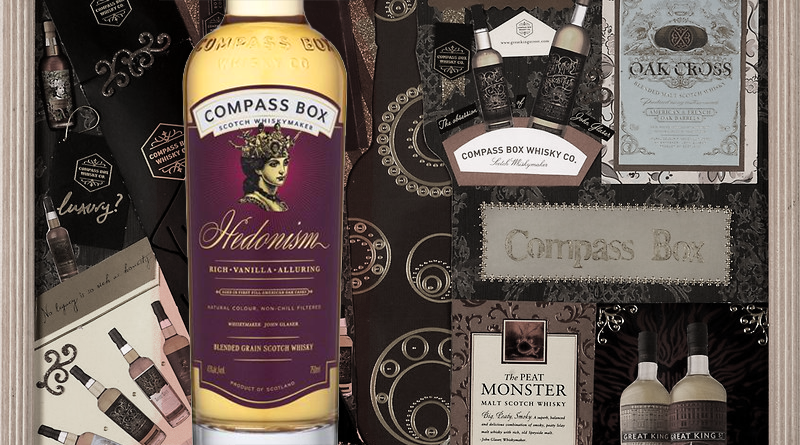 I’m a single malt enthusiast, but that does not mean I don’t like other whiskies. Or other spirits for that matter.

Compas box has been a whisky maker that thinks, pardon my obvious choice of expressions, outside de box. They like to do things their way and challenge conventions. But most of all they like making awesome whisky. And I’ve been a big fan of pretty much everything they do for more than a decade now.

Hedonism was their first whisky back in 2000, and it set the tone for Compas box: beautiful labels and packaging while making an awesome whisky that also makes you rethink everything you know. You see, they launched this in the midst of the first single malt boom, when pretty much everyone thought ‘malt good, grain baaaaad’. Yet they dared to launch a blended grain whisky.

I originally tasted this whisky in 2011 and was an instant fan. I wrote tastenotes about it with Jurgen Vromans (The Whisky Mercenary) and Werner Van den Nouwelant in 2012. Back then it had the original packaging which has had a revamp now. I’m a bit torn about that one, I like them both.

I got myself a sample of the new bottle just to check if my old notes still hold up. And they pretty much did, although it’s almost impossible for such a whisky to remain 100% the same. Also, my pallet and experience has evolved as well.

Still, I pretty much could confirm the old notes, and most of all I still loved it.

Corn, vanilla, coconut, light pepper, cocoa powder, wood. The wood is a good thing by the way, it carries the sweetness of the corn and vanilla. Again, reminding me of a high-end bourbon while doing its own thing.

Corn, pepper, vanilla, cocoa, mint, wood, banana, nutmeg. Pretty long. Seriously, close your eyes after swallowing this and pay attention. The finish will really put a smile on your face. Usually a finish is less fruity than the mouth, here it’s the other way around.

So yeh, that still works. In a big way. Malt snobs, I dare you to try this and say you don’t like it. The vast majority of you would be lying if you did. You know, like you also lie about how many 60’s Bowmore you had.

This whisky reminds me of: Skin

You have to ask? Seriously? Ok in that case check this link.