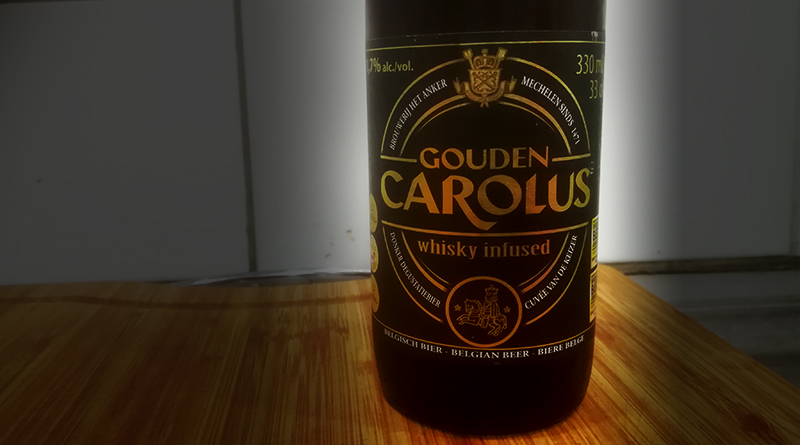 These days, craft brewers are not shying away from experiments. And what you have seen quite a bit is beers that are aged in barrels. Whisky, rum, brandy, you name it. So, it would make sense that Gouden Carolus would do just that. After all they own both a brewery and a distillery. The Distillery is fairly new, but the brewery has been around since 1471. Probably not that important but I figured since you are reading a blog about booze it would interest you.

However, with this beer, they did not go for aging in whisky barrels. Instead, they went for a process they call ‘whisky infused’. In essence it means they add a bit a whisky during the brewing process. The result being a dark beer with whisky influences.

Reviews have been mostly raving on the internet. And while we haven’t had any whisky infused beer before this one, we tasted our share of whisky barrel aged ones and most of them were pretty good or even downright awesome. It was definitely a beer that sounded interesting. However, listening to a beer would be silly, so I invited Werner Van den Nouwelant and Raoul Baelus to have a taste instead.

Sweet. The whisky is fairly prominent. Malty and grainy. Some coffee and a bit dusty. Kind of what we expected, except for the dust part. But it didn’t bother us.

Whisky, grains and sweet malt. Not getting much else but what we got was good and powerful.

Whisky, malt and grains again. Sweet, with a lot of chocolate yet some woodiness as well. Fairly long and certainly still plenty of power.

This is a good beer. It’s powerful and balanced, yet surprisingly easy to drink. Specially considering the fact that it’s a dark beer with a high alcohol percentage.

It is, however, not the super beer some people feel it is. Well not according to us anyway. I think I can speak for the three of us when we prefer aging in whisky barrels over this. And I’ll make sure to get you some tastenotes of prime examples in the near future.

Still, as stated before it’s still good and for sure an experience every beer drinker needs to have at least once. And I’ll happily drink one if offered. I just don’t see myself buying them for home use, unless I am planning a home tasting where it would fit in the theme. And I can certainly think of a couple.

Remember in the end everyone’s taste is different. So, if you think this is super, more power to you. And don’t hesitate to leave a comment if you have an experience with this one, good or bad.

This beer reminds me of: Steve Carell

Pretty good, but not the absolute great some people seem to think he is. Not according to me anyway, nothing beats Ricky Gervais anyway.