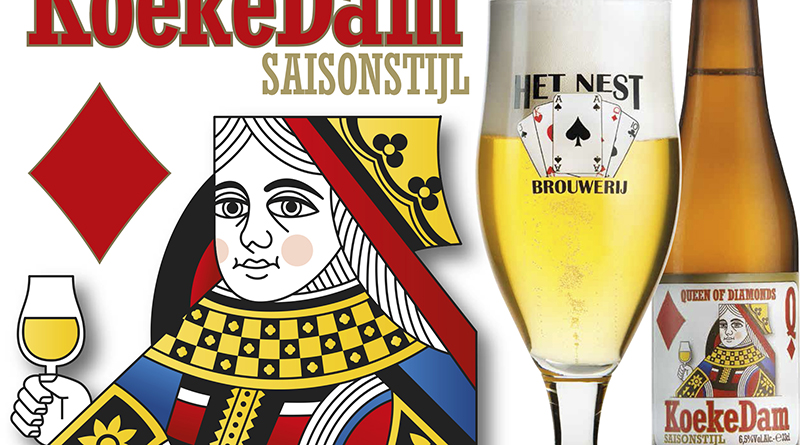 Man it’s hot. Time for a saison beer style in my glass.

Turnhout is basically famous for one thing: playing cards. So, when a craft brewery emerges in the small Belgian city, it’s pretty obvious what theme they will go with.

‘t Nest originated about 20 years ago as a beer tasting club that evolved in a hobby brewing club and then a proper craft brewery. Incidentally they were kind of located at what was then my favourite pub. So, I know a few of the owners, but that won’t hold me back if they make something I don’t like. Luckily enough the vast majority of their stuff I do like. Quite a few I love.

Koekedam, or the queen of Hearts is a saison style beer. Along with IPA one of my favourites, and most of all pretty much the beer style that replaced lager for me. At a similar strength it delivers much more complexity and taste. And a lot of saison offerings are really not that expensive.

I originally tasted this for beproefd along with none other than Jurgen Vromans, aka the Whisky/Rum Mercenary. As this is a very hot day, I think a retaste is in order just to make sure we knew what we were talking about back then. Oh, the sacrifices I make for you lot.

Earthy touches, there’s that forest again. Citrus, grains, hops, and a whole range of spices. Peach still in the background.

I know ‘forest soil’ sounds bad, but it’s actually really good. Think of the times you went playing in the woods as a kid. The smells and sensations were great then, and it’s that stuff it reminded us off.

Anyway, this is really good and amazing at quenching your thirst at high temperatures while giving you a great tasty experience to boot. What’s not to like?

This beer reminds me of: Robert Smith

Seriously, did you even read the text above if you have to ask why?