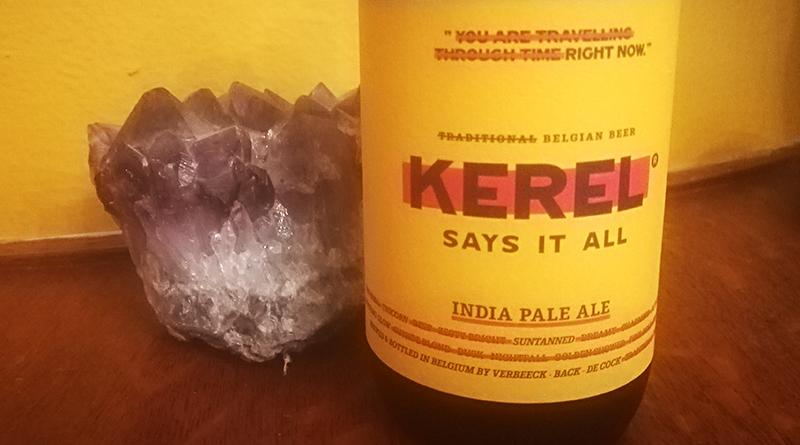 As fans of the IPA style we are constantly looking for the best India Pale Ale Beers. Have we found a contender?

Kerel is a fairly new brand of Belgian craft beers. Or is it? On the website we find an interesting story at least.

The Original Verbeeck – Back brewery has indeed been around since 1867 but had been closed down in the mid-sixties. According to the website because ‘the family had other plans’ and the brewery dosed of for ‘a short nap’. Knowing what other substances were popular back then we have a pretty good idea what caused this break in operations.

In 2015 the family, now augmented with the ‘De Cock’ name decided to revive operations. Again, the website has some romantic reason for it: a single bottle of the old stock was found in some basement and was used to scientifically rediscover the original Kerel yeast DNA. Oh my.

You can read all about it on their website, where they also boast to have always been an artisan family owned brewery that never had to do anything with either big corporation or the Catholic Church. In fact, they proudly use the term ‘untouched by monks’ on their bottles. With what we know now about Catholic child abuse that certainly has some extra layers.

To honour their story and tradition, I dusted of Werner Van den Nouwelant to assist with this first brand-new taste note. We agreed we really liked the branding, marketing and packaging. Especially the shape of the bottles. They used to be a classic over here but got out of style in the late nineties. But did we like the beer?

Bitter yet fruity. Peach, marzipan, strawberry, gooseberry, cherry and caramel. Mind you, it’s not a Kriek, the cherry kind of lingers that’s all.

Bitter again, and a creamy texture. Weird for an IPA but it works. Probably because it also sparkles a bit. No, it’s not a Twilight Vampire. Vampires don’t sparkle, ask Lestat. Hops are more present, and the peach, gooseberry and strawberry are all still fairly prominent.

Still bitter, and it loses the fruity tones rather fast. Dries the mouth a bit, so it leaves you wanting more. Hops get more on the forefront, and in a good way.

Do we like this beer? No, we absolutely love it. This is one of the best IPA’s we’ve tasted, and we tasted quite a bunch. It’s close enough to the profile to be a proper IPA yet has a few tones that distinguish it from the bunch. And at a low strength of 4,5% it provides an unusual complex and tasty experience for an alcohol percentage this low.

And that makes us wonder … why the hell would anyone still want to drink normal lager (pils beer) when there is stuff that is so much better at this strength available.

This beer reminds me of: David Bowie

Loads of depth, and made more comebacks than humanly possible. Alien after all?