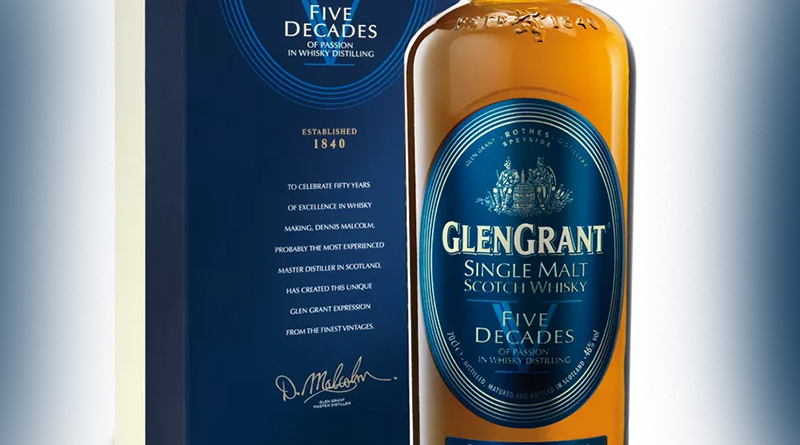 Glen Grant whisky has been popular as a single malt a bit longer than a lot of the other distilleries. This has a lot to do with their focus on a good quality entry level single malt named the major’s reserve. This has been very popular on mainland Europe, mainly in France and Spain.

It’s also been very popular for older expressions with independent bottlers. One of my first pup memories in Scotland is seeing a rack with Glen Grant whisky bottles aged 12 to 50 on the counter, all with the same Gordon & McPhail distillery label.

So, with the young stuff being pretty good value and the old stuff at times spectacular, it would be interesting so see what a single malt with both young and old barrels in it would taste like. The folks at Glen Grant thought so too.

When Master Distiller Dennis Malcolm retired after being with the company for 5 decades, the perfect opportunity arose to make it happen. Hence the ‘5 decades’ expression, where Malcolm chose whisky from each decade he worked in to create this rather exciting single malt. I did the original tastenotes for the old Dutch blog with Werner Van den Nouwelant, and we had a wee retaste before I wrote up this article.

Apple, pear, raspberry, strawberry, vanilla, light pepper and Fruitella. A nice harmony to it all.

Pepper, raisin, vanilla, apple, pear, nutmeg, raspberry. They fruit is still there but is now supported by some nice spicy tones. It keeps on lingering, the length of the finish most likely provided by the older participants of this vatting. We both seriously enjoyed this Glen Grant whisky.

So, while there are young and old whiskies in this vatting, the taste and experience are mostly what you can expect from an older expression: complex yet balanced with a long finish. Soft but full of character. This shows that while you don’t always need old whisky, a few older barrels do come a long way.

While this does not have a strict age statement, I don’t consider it a NAS expression. After all you have a very good indication of the age of what is in the bottle. Or should I say ages?

This whisky reminds me of: Stevie Nicks

Sounds soft and sweet yet with a lot of depth. Has been around for a long time now, but relevant the whole time.