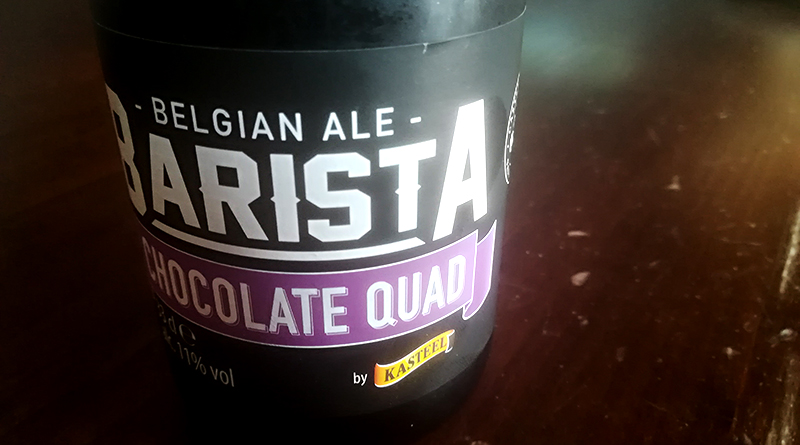 You want easy chocolate cupcakes with alcohol? Well this beer is not baked but it might still be what you are looking for. After all what is easier than drinking your dessert and not having to bake it. Kinda joking of course, this is a serious beer.

Belgian brewery Van Honsebrouck  is mainly known for their Kasteelbier range. They are big enough to be considered mainstream, yet small enough to have an artisan kind of feel to them.

A couple of years ago they decided to be done with the traditional Christmas ale and replace it with something more bold. No doubt they were inspired by the new wave of craft Beers emerging all over the world, but who’s complaining right?

For this they use specially roasted malt to which they add coffee beans and cocoa powder. Let’s see if we taste these ingredients.

Mocha and mocha ice cream. Dark chocolate. Café noir cookies. Banana, tobacco and salt. The chocolate and coffee hits you in a big way. Can’t wait to taste it.

Wow, this is a meal. Mocha ice cream. Malt, sour apple and banana. A hint of dark chocolate lingers. All big flavours that deliver an intense experience. Heavy texture thought.

Mocha ice cream, salt, dark chocolate and banana. Still that lingering dark chocolate. So very consistent with the taste, and lingers around quite a long time after swallowing.

So A nice beer with a very full taste and a fantastic nose. Wake up and smell the coffee! Although in all honesty the heavy texture actually has the effect of a milkshake. It fills you up fast and I don’t see too many people drinking more than 2 on the same evening.

If the intention was to compete with the better craft beers, then the mission was certainly successful. The recipe incidentally has many elements: water, yeast, candy sugar, 4 types of hops, 3 types of malt, chocolate and coffee.

The result is a wonderful tasting beer with a serious kick, something that we are very happy about from a mainstream (although of course not a brew giant) brewery. More of that please!

This beer reminds me of: Laurence Fishburne

Likes dark roles but has a bittersweet side. Loads of character and you probably won’t watch 3 of his movies in a row while very much enjoying one.