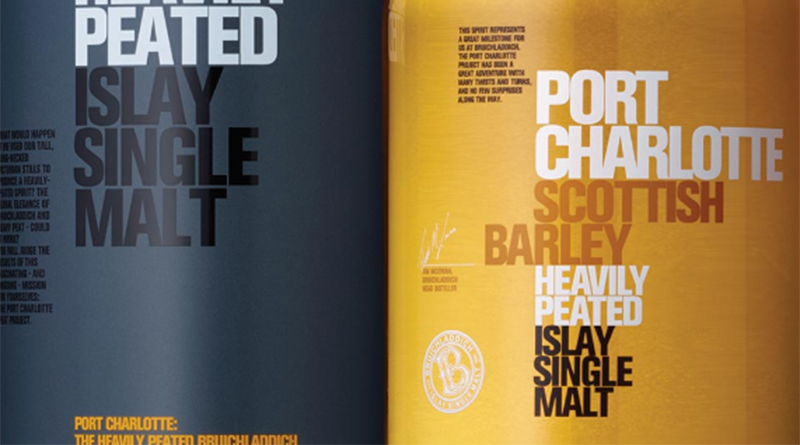 Port Charlotte is one of the brands of Bruichladdich Distillery (Islay region). It’s used for a range of whiskies that is medium strength peated. The real peat monsters are marketed as Octomore, while the brand Bruichladdich itself takes care of the non-peated part of the distillery. (Or lightly peated).

So, when a Port Charlotte expression proclaims to be ‘heavily peated’ it raises questions. Let’s see if we can find some answers.

This official expression has been bottled at 50% in 2015. I’ve originally tasted it in 2015 along with Werner Van den Nouwelant for the now dormant Beproefd.be website (my old blog in Dutch). I did have a sample left for a retaste but that only confirmed our findings back then.

Peat, smoke, pine tree, minerals, coriander, vanilla, apple, pear, nutmeg. Smoked meat. That sounds really complex and it is, but it balances out quite nicely. High expectations for the taste then.

Peat, vanilla, apple, pear, banana, dried meat. Still balanced but it loses quite a bit of the depth from the nose. Still good, but feels a bit too average.

Peat, vanilla, apple, pear, banana, pepper, soft chili, bakery cream. Sparkling. And there’s the comeback. The balance stays, but the complexity from the nose comes back to add depth again.

Pretty tasty whiskey that makes you feel happy for sure. The finish is long and exciting, the taste and nose solid and balanced. The nose does promise a bit more than the taste provides, but the finish makes up for it with a vengeance.

The smoke and peat is present but mostly has a supporting role for the sweet and savoury accents. The drinking strength of no less than 50% also helps to create a full taste, without bothering you. On the contrary, you would rather give this 43% or 46% blind. It’s without caramel colouring and non-chill filtered, and a good whiskey that also deviates just enough from the ‘middle of the road’ to be interesting.

I am a bit sad about the absence of an age statement though. It should not bother me as the quality of this whisky is fine, as opposed to a lot of NAS single malts that use marketing to mask lack of quality. But it does, because NAS just annoys me to bits. Still if it does not and the profile fits you, this is a good value for money.

This whisky reminds me of: Robbie Williams

Lots of potential. Bland although decent mid-career with Take That. Finished quite strongly and long lasting with his solo career. Seems to be ageless. Can also annoy me a bit at times but full of character.