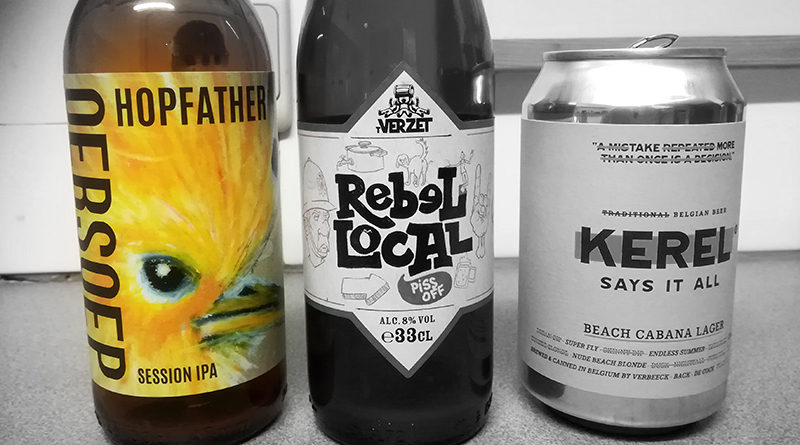 In the old days, back when Belgians were pretty much the only people who could make decent beer, we used to laugh about Dutch beer. A lot. Claiming it was little more than water.

Times have changed, and Dutch brewers, like other brewers around the world, are at times giving us Belgians a run for our money. And if there is one style I frequently grab when going abroad for beers it’s IPA.

Now the Dutch would not be the Dutch if they didn’t come up with a lot of silly names for their beers. It’s their tradition really, most of their surnames are silly as hell and if you ever gamed with Dutch people you would know they usually just name their characters in World of Warcraft after the first thing they see while launching the game. My old guild had a night elf named ‘Pencil Sharpener’ and another named ‘Coffee cup’. In Dutch of course but since I also speak the lingo …

Oersoep means ‘prehistoric soup’. Weird name, since IPA is kind of a modern trend. But hey, it’s all about the beer, not about the name right? So, I put on a red light at my window, luring in Werner Van den Nouwelant and after his initial disappointment he was more than glad to help me taste this beer. And others, and some whisky as well. All for this site.

Oh, and for all you SJW’s and other brands of snowflakes: the red-light thingy was a joke. No offense was meant, and no red-light bulbs were hurt during the production of this joke.

But back to tasting.

Wow, this sure is promising. Loads of tropical fruit, with passion fruit certainly taking the front seat. Peach and mango as well, maybe some berries. Just a hint of hops at the back, but the fruit explosion overwhelms. In a good way.

Still plenty of fruity tones, some nice bitterness and the hops are more prominent. Not as spectacular as the nose, but it still reflects its character.

Oh boy. Short, flat and watery. Just a tad of the hops for the first 2 seconds, then it all comes crashing down. How extremely disappointing. It was a bit close to the expiration date and Werner did point out IPA’s a lot of the time are better when you drink them sooner. So, I do hope it’s better for a ‘fresh’ one, and I certainly will want to find out. Although he also told me he had previous batches with a similar experience. So, I’ll have to keep you posted on this.

Well, that went bad fast. So much promise in the nose, still decent enough while tasting but the finish was a huge disappointment. Flashbacks to my youth when Dutch beer was watery and flat.

Speaking of my youth, just before I started drinking beer (At those times in Belgium that was about 12) I went to see Return of the Jedi at it’s premiere in cinema’s. And this beer reminds me of my feelings about Star Wars. Started out spectacular (original trilogy), then it was somewhat less yet still pretty damn good (prequel trilogy), but it was a huge let-down in the end (Disney Trilogy).

I’ll get a newer one to give it a chance to redeem itself. Kind of like I’m currently giving the Mandalorian a chance to have Disney Star Wars redeem itself as well. (Although in all honesty I did think Rogue one was awesome).

But I’m very curious about your experience if you happen to have this one yourself: did the finish let you down or is it really an age issue. And even so, should the quality of a beer not be optimal before the expiration date?

This beer reminds me of: Jar Jar Abrams

Promises a lot but couldn’t deliver a decent finish if his life depended on it.