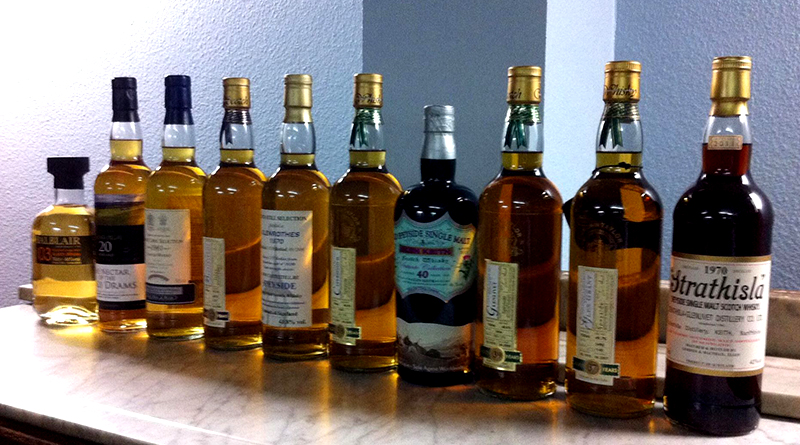 I know, normally I mainly write beer, whisky or whiskey tasting notes. I realize I haven’t posted more than one ‘actual’ blogpost but have been concentrating on tastenotes for now. And even then, I could and should probably up the volume a bit.

Then two things happened today. The first one is I shared the tastenotes of the Lochside 1981 on my personal Facebook wall. Now usually I don’t tag a lot of people in it. I know its good publicity, but I simply don’t like tagging my friends unless I have a proper reason for it. I know for a fact I don’t like to be overly tagged myself.

But the Lochside took a prominent part in a lot of great memories, or malt moments as I would like to call them. Not my term by the way, you can thank Ralfy Mitchell for that. Check out his great YouTube channel if you don’t know who he is. It was in the line up of 2 tastings I hosted for my 44th birthday: one with whisky loving friends and one with family.

I should probably point out that this was just before the prices of whisky started to go up like crazy and I could still get 1970 bottles for sort of a reasonable price. Also, I had more money back then.

Anyway, my friends pooled their cash to give me a nice birthday present: 2 more vintage 1970 whiskies. And of course, I opened those on the spot as well. It’s what you do. In fact, after all those goodies people kept pulling other spectacular bottles out of their backpacks. It’s safe to say it was a lot of fun … but perhaps not the day after.

It was a legendary evening with great friends, and the fun was repeated later when I redid this with my dad, sis, uncle and nephew for an encore. Not that they would not have been welcome, but back then my dad still did not drink alcohol for 40 days during advent and so I did a separate session for family after Easter.

The third great tasting it was on was again the stuff of legends. I invited a couple of friends from the Belgian whisky scene to my home with the following challenge: Pick a whisky to share, choose 2 songs and explain why you went with that combination. The result is what we call a DLT or Dirty Little Tasting: you probably don’t want to know what passed the table. As I kind of expected no one stuck to the 1 bottle rule, although 1 person who’s name I won’t mention (but he has a Ferrari obsession) blatantly broke the rules by using only 1 song and 2 bottles. As a result, he still has to explain the rules to any new people who get invited in the mix, as this has been an annual thing now.

Anyway, my point is: it was again an amazing evening. Those present almost always will bring it up at some point when we meet at festivals, tastings or whatever. And those that followed were equally great and fun.

Another thing that happened today seemed more trivial at first. I saw a twitter post pass from someone I didn’t even know, but he mentioned he had a great time with a friend drinking whisky in a bar until 4 am. He mentioned some great Japanese stuff he had and how much he enjoyed the evening. That again made me relive some of the great malt moments I had over the years. I should probably give him a shout out; he has a bit of a following on twitter and with good reason. So, @Nonunsenses, thanks for the inspiration! You probably caused me to write this one …

And this is what whisky is all about: the moments of sharing with friends. There’s a reason this site is called made 4 drinking. Whisky is meant to be enjoyed, and while I really enjoy a dram alone in front of the television, there is no experience like sharing the good stuff with people who also enjoy it. Whether it’s at festivals, tastings, DLT’s, at a bar or just at home with a few friends, whisky is best in a social capacity.

With that in mind, let me know how you enjoy your drams. Or beers. Or whine. And also, would you be interested in some blog post where I line out some great concepts for tasting evenings I came up with or enjoyed over the years? Let me know in the comments.