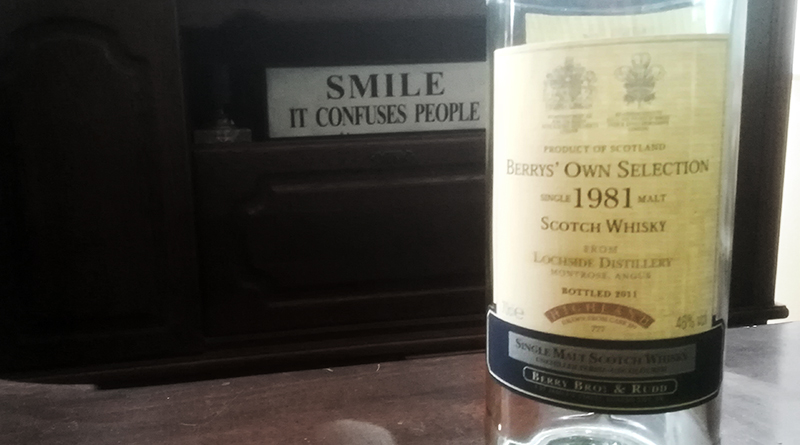 Some single malts are great, some are awesome. But a few reach sort of a legendary status. And I’ve been fortunate enough to taste quite a few of the latter. In fact, I even owned a few of those legend bottles, and believe me when I tell you it kind of hurts when you finish them.

But I finished the last dram of one just so I could do a retaste for this blog. The bottle was in fact gone for a while now, but from the good malts I tend to save a few samples when the bottle is almost empty. And I did just that for this one.

The thing with whisky is: as long as a bottle is reasonably filled, it doesn’t really change. But below 25% the air will start to have an influence. Mind you, not always a bad one, but an influence none the less. So, I use Smaller sample bottles to keep the last bits of great bottles. It’s something I really recommend doing, and sometimes it actually gives you a nice surprise if you are like me and kind of forget what samples you have lying around. I should really check them out again.

Anyway, you might not be familiar with Lochside, and if you are, chances are you’re kind of a whisky maniac like I am. The distillery has been closed down in 1992 and demolished in 2005. So, we are talking some rare stuff here.

It took considerably less arm twisting to get the whisky mercenary Jürgen Vromans and Werner Van den Nouwelant to have a taste with me back in the beproefd days (my old Dutch blog). That last sample for the retaste I did not share though …

Burnt toast, butter toast, smoky (wood), citrus, green herbs, peach, apricot, mango, caramel, pineapple, lychee, clementine, banana, vanilla. Wow that’s a lot. Yet it’s all there and probably more. This is just what we identified. This nose has so much depth it would shame every single fragrance in a high-end perfume store if you are talking complexity.

Tropical fruit, grapes, apricot, peach, strawberry, and pretty much all fruit we mentioned in the Nose section. Also, some light pepper to carry it all. Wow, this is every bit as good as you would expect from a legend.

Again, all that fruit, with an emphasis on the Tropical fruit. Still pepper and light tannins. Some green herbs, mainly mint. Exceptionally long, but still not long enough. You don’t want this to end. Ever. But I did away with my last sample, so it’s gone now. And I’m sad.

Holy Guacamole. This is seriously awesome whisky. You people realize that I gave up my last sample just to bring you this article, right? The sacrifices I make for my readers.

Some whisky is overhyped. Every Macallan of the last decade comes to mind. But this certainly lives up to its reputation. If you manage to get this bottle, or even a sample of it, don’t hesitate. It’s worth whatever they are asking, which will most likely be a lot.

And one more note to the Scots: stop demolishing great distilleries!

This whisky reminds me of: Neneh Cherry

Fruity, exciting and a lot of depth and character. And it’s not even a sherry cask! I know, lame jo

Released by: Berry Bros and Rudd