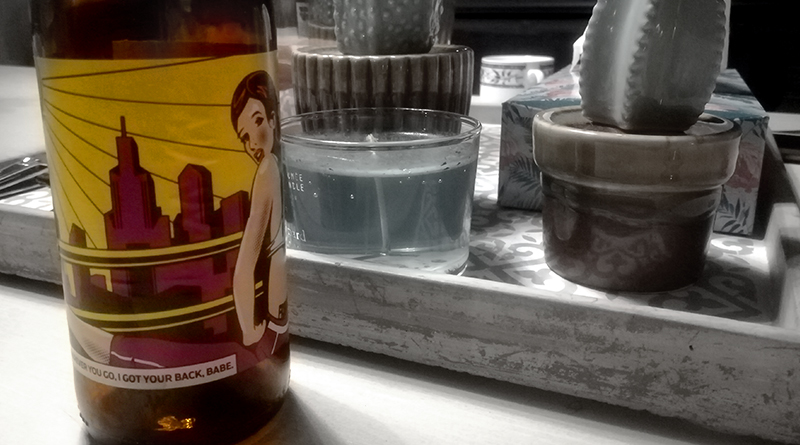 As Belgians we used to laugh about the lack of quality of Dutch beer. A classic cartoon going around here is a Horse drinking Belgian Ale and urinating Heineken. But truth be told, like the rest of the world, the Dutch have some pretty damn good craft breweries these days. And I’ve enjoyed some absolute stunning beers from north of our border the last few years.

Tramp Stamp is made by Frankendael brewing, which has been active since 2015 in Amsterdam. Yes, that city with the famous red-light district. Get your mind out of the gutter, we’re here to talk about beer. Their beers have great looking labels in a Roy Lichtenstein style pop art and fun names like White Bastard, Three Idiots triple spiced and of course this one. So cool marketing, but is the beer any good?

As my tasting buddy for this one I recruited Pauwel Cornelissen. He has been one of my whisky and beer buddies for years now and also brews his own beers in a semi-professional hobby beer brewers club. We noticed the low alcohol percentage of 3.5 for a Saison. While we certainly had decent to good low or even zero percentage beers, for a saison it still worried me a bit. But let’s get to the tastenotes.

Well first thing that surfaces are aromatic hops. Some caramelised biscuits, vanilla, passionfruit and mandarin. Also, some maltiness and cinnamon. The herb, not Dr. Rajesh Koothrappali’s dog. This is promising.

Fruity and lightly acidic. Some hops, orange and citrus. The body is a bit watery though. Not nearly as powerful of a sensation as the nose was promising.

Too short. Bitter, with wood, white peppers and grains. A saison should be bitter at the end, but we would have liked some of the fruit to make it to the end.

This is not a bad beer. But it’s not that good either. I’m sure it works at a very hot day, but we’ve had saisons that were seriously better than this one. To put it in Star Wars language: it’s not as bad as The Last Jedi, but it’s still only ‘Solo’ compared to a style that also produced ‘Empire’ Quality.

We can’t shake the feeling that has to do with the low alcohol percentage. All that should be there is actually there, but except for the nose it’s all to faint and distant. It might also work better on draft, as that tend to give beer a bit of extra power when done right. Or perhaps canning it would also work better for this. As it stands, we feel it’s a bit of a missed opportunity.

This beer reminds me of: Oscar Isaac

Actor with a lot of potential, but given too light of a role in Star Wars as Poe Dameron