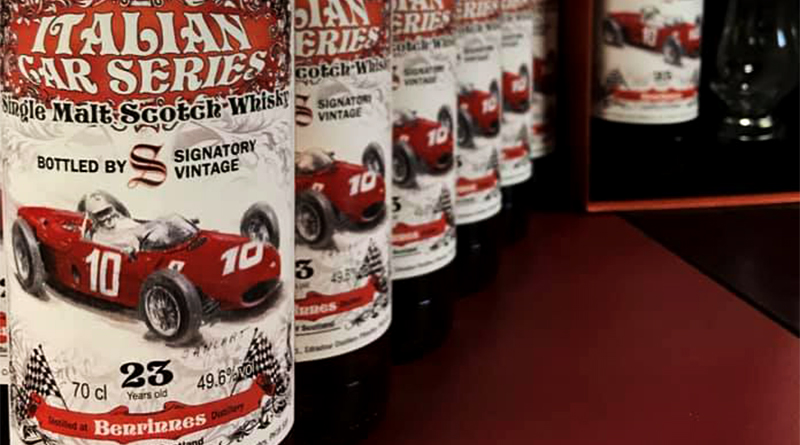 These days, prices of whisky are going through the roof. To find something good and affordable (relatively speaking) above age 21 is a challenge. By 21 of course we mean the age of the whisky, not the buyer.

The Italian car series is a whisky series by independent bottler Jan Vissers from Belgium, who combined his passion for Italian sports cars and whisky. Every single bottle so far was a hit and priced very reasonable at that. Specially if you take Belgium’s ridiculously high alcohol taxes in account.

As a side note: that tax was meant to win the Belgian government about 100 million euro’s in 4 years. Instead it caused a loss in tax revenue of almost 100. That effectively results in a 200-million-euro difference, or a net loss in the annual budget of 50 million. Politicians are morons.

This expression of Benrinnes was a joined effort between Jan and Signatory Vintage, one of the oldest and biggest independent whisky bottlers out there. Still, it says something that Jan was allowed to launch this within his own label range with just a few minor tweaks to indicate the involvement of Signatory.

Benrinnes itself is not the most known nor sexy distillery. It’s owned by giant Diageo, but not one of the distilleries they heavily market as a single malt. In fact, the only well known official Benrinnes is still the 15-year-old from the flora and fauna series. That means a lot of the production goes into the blends.

A bit sad since it does make a pretty good single malt, and we can thank the independents for bringing some of it on the market. So, let’s have a taste along with my partner in crime Werner Van den Nouwelant.

Host. You know, what passes for the body of Christ in the Catholic church. Some nice fruity notes, mainly pear, gooseberry, blackberry and citrus notes. Pepper and paprika powder.  A bit dusty, but not in a bad way. Promises made for sure.

Still very fruity. Berries all around, gooseberry, green apple and citrus. Some nice peppers to hold it all together.

Peppers go up a bit, but the fruitiness remains. Mostly the gooseberry and citrus. Some Eucalyptus, where did that come from all of a sudden? But a nice addition. Promises delivered.

This is a very good single malt, with depth and balance being the key words. At cask strength this baby packs a punch and leaves you wanting more. And at the time of writing, there are still a few bottles left in stock, only available at the Single Malt Whisky Shop.

Bottles like this one make us happy and grateful for the existence of independent bottlers: people who share our passion about whisky, although they no doubt also want to make money. But that’s ok, if you bring out this kind of quality you deserve it.

Now, if someone could sponsor me the car on the label …

This whisky reminds me of: Alain Prost

Great pilot, loads of depth, loves to live life and enjoy it.