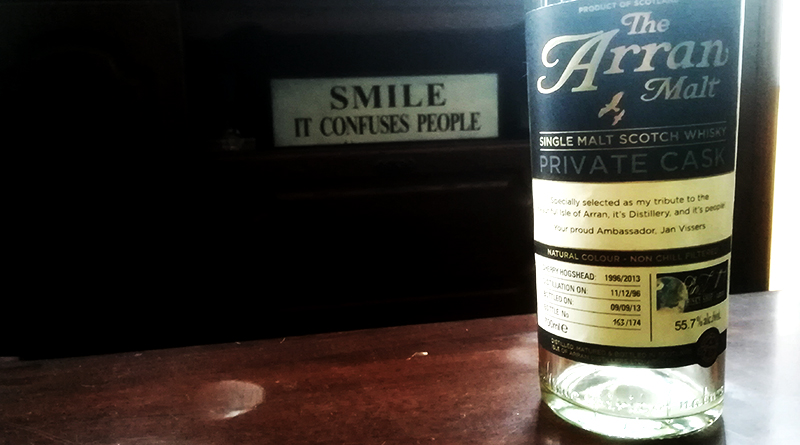 Isle of Arran whisky has been around for ages due to countless illicit stills, but they didn’t have an official single malt distillery for quite a long time. This changed when the former director of Chivas Harold Currie founded Arran Distillery in 1994. I guess he was tired of selling overrated and overpriced blends and wanted to focus on great whisky for an honest price. Mission accomplished we now know.

Of course, there is another name in the title, and I should probably explain this as well. Jan Vissers is the owner of the Single Malt Whisky Shop in ‘Zammel of all places’. Zammel is a small town that is part of the bigger town Geel. Even though it’s much closes to another bigger town called Westerlo. As such it would have made more sense to be part of Westerlo instead of Geel, even though Geel is a slightly bigger town than Westerlo. Still, Zammel feels more a part of Westerlo, and especially the Single Malt Whisky Store since it’s very close to the Stadium of football club Westerlo, which is a slightly bigger football club than football club Geel. I think it’s obvious I don’t want to confuse you in any way with sizes.

Anyway, Jan is also the brand ambassador for Arran Whisky in our neck of the woods. And as such, he gets to bottle single casks from time to time. And this one has become somewhat of a legend. A lot of people called it one of the best Sherry maturations in recent years. And truth be told, when I first tasted it for my old Dutch blog, I was one of those people.

So, I definitely felt this deserved a retaste. I used the last bit I had left from my bottle for this. Now I’m sad, because it’s pretty much not to be found anymore, unless you find it at some auction. Rumour has it Jan still keeps a nice stock for personal use hidden somewhere, so I really should pay him a social visit at some point.

So why a (re)review for something that is next to impossible to find? Well easy: for those of you who see it at a friend’s house: ask for it. And if you see it at an auction: grab it. Seriously.

Sherry, cherry, strawberry, mocha, raisin, oak, dark chocolate. Not as complex as the nose, but still a lot of depth and more importantly absolutely bursting with flavours. A powerhouse, and in a good way.

This whisky is, like I said before, an absolute stunner. I originally tasted this with The Whisky Mercenary Jurgen Vromans and Werner Van den Nouwelant. The retaste I did on my own though. Can you blame me, it was my last sample.

I’ll put this on the Whisky Graveyard also. For those of you who don’t know this: it’s a nice Facebook group that honours the dead bottles of whisky. (So, you can post them there to give them a proper ‘funeral’.)

This whisky reminds me of: Felipe Massa