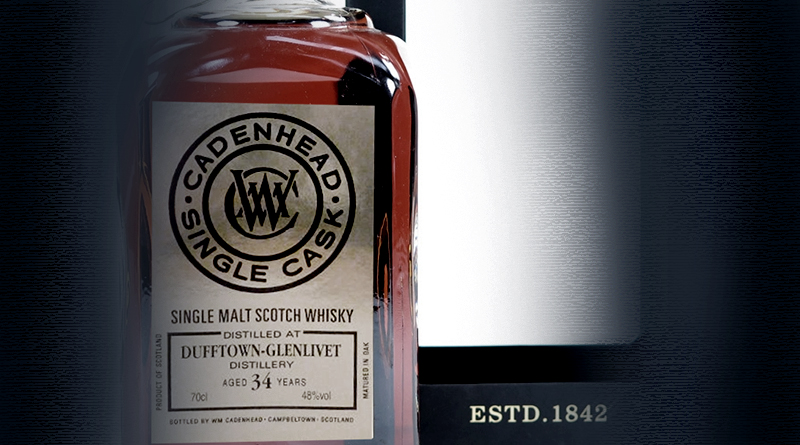 I’m blessed enough to know a lot of people in the whisky scene. As such I get to drink a lot of the high-end stuff as we frequently come together to share bottles, samples and so on. And of course, there’s always whisky festivals, which are a great place to taste whisky you normally would not.

Dufftown is not exactly a well-known single malt like Glenlivet or Glenfiddich. In fact, for a long time they hardly had any official single malts besides the 15-year-old Dufftown in the flora and fauna series. That changed when owner Diageo launched the Singleton of Dufftown 12-year-old in 2006, later followed by a 15 and 18-year-old.

Having said that, for the really good Dufftown one often looks at independent bottlers. And this expression is from Cadenhead, which happens to be the oldest independent bottler around. It is originally based in Campbeltown, a Scottish town quite famous for its whiskies.

I have great sympathy for most independent bottlers, and Cadenhead is probably on the top of my list or very close to it. Part of it is their way of doing things: a great example is that they don’t actually ask your date or year of birth when entering their site, they just ask if you’re old enough. Just so you know, that date has nothing to do with being a minor, and everything with stats for the respective marketing departments of the companies that ask for it.

Another reason I like them so much is Mark Watt. For years he was one of the most fun brand ambassadors you met on festivals and tastings, always good for a few laughs and great whisky. He has since been promoted (and I’m not sure how he feels about that since I think he misses the old job) but that only ads to the great direction the company has taken.

So, with me liking them so much, I better hope this whisky is any good. I hate to give people I like a negative review, but I honestly would do it if the whisky deserves it. I tasted this with The Whisky Mercenary Jurgen Vromans and Werner Van den Nouwelant.

Wow, this is promising. Plum, milk chocolate, mocha, cherry, raisin, Darjeeling tea, walnut. The tea carries all the rest. I could just not drink this and smell it until it’s gone but that would probably be a waste. So …

Licorice and a bit of regular wood. Cherry, chocolate and mocha. A bit less depth than the nose suggests but boy is it powerful and tasty. Old style sherry casks for sure.

Licorice and wood still. Also, very much still cherry, chocolate and mocha. This time enriched with basil and mint. There is that tea again. The complexity is back with a vengeance. Takes a long time to linger as well. If you can wait that long to take another sip.

So yeh if it’s not obvious yet: we really liked this one. Proper old-style Sherry maturation. That means it has matured in actual Sherry casks, not the ones they use today. I should probably explain this: these days they make sherry just to make whisky casks, and the sherry is low quality and gets thrown away mostly. Sad really, enough teens with no taste who would like to get drunk cheap, so poor some sugar in them (sorry Def Leppard) and sell them as pops I would say. Or perhaps they already do.

But I digress. I liked it a lot. We liked it a lot. It can still be found on auctions or the occasional shop. Grab one if you can find it under 400 euro. It’s worth it. It might be worth more.

This whisky reminds me of: Joey Kramer

Drummer of Aerosmith. Old School rocker with a lot of years under the belt. Loads of character. Owns his own coffee brand as well.