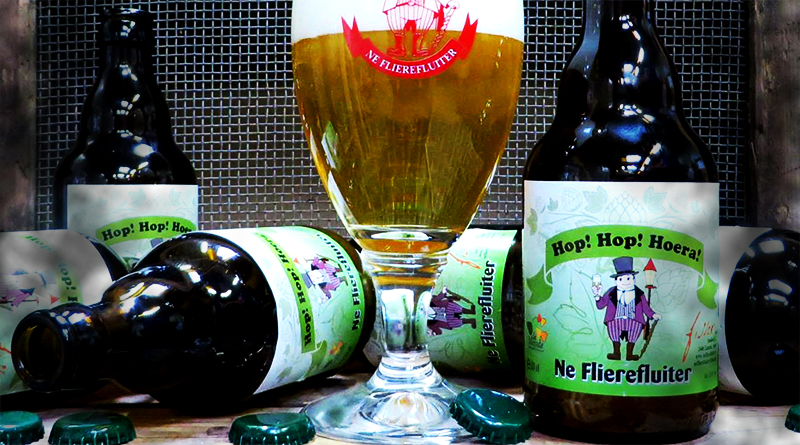 When I first tasted this India Style Pale Ale Beer called ‘Hop Hop Hoera’ for my old Dutch Blog, IPA beers were all the rage, but it remained to be seen if they would stay popular. We’re a few years later now, and it’s blatantly obvious the style is here to stay.

Since this particular version has become one of my benchmarks and I almost always have a few in the fridge, it seems a good plan to do a retaste for this new English blog.

Hop Hop Hoera is the third core expression from Ne Flierefluiter, the beer brand from brewery Fisser. If the name sounds vaguely familiar, you are probably a whisky lover living in the Benelux or on the Isle of Arran and know Jan Vissers. Jan’s family owns a brewery and a large beverage store which includes an amazing single malt whisky store and a tasting cellar.

Perhaps an explanation of the name: ‘Hoera’ is a cheer that’s used a lot by Dutch speaking people, and also apparently by the US Marine corps. So, if you need to know how to pronounce it, check some American movies or series (Heartbreak Ridge comes to mind). And it’s used in the phrase ‘hip hip hoera’ which is mainly used when it’s someone’s birthday or anniversary. So, change the hip by hop (No translation needed I take it) and you have the pun that makes up the name of the beer.

But Hey, time for a retaste. I originally tasted this with Werner Van den Nouwelant, and we kept sharing this one for years on end after that. So spoiler alert: we liked it.

Fresh, with citrus, hops, kiwi, mandarine and a hint of strawberry. A lot of depth in the fruity tones. Promises a lot.

Hops and citrus, pleasantly bitter, fruity notes of kiwi and clementine. Delivers on the promises of the nose in a big and satisfying way.

Bitter (but still pleasant), hops, kiwi and citrus. Drying but still thirst-quenching. But while it does quenches your thirst you still want more.

So yes, it’s an awesome beer. And at a low 5.8 % alcohol percentage it’s a beer you can have a few of. And that’s a good thing, because you’ll probably want a few. In fact, while it’s complex and great for slow drinking, it’s also dangerously easy to drink if you’re thirsty. Before you know it you’ll have downed plenty.

So, do be careful and don’t drink and drive.

This Beer reminds me of: Elisabeth Shue

Ali with an I can be fruity and cheery in easy entertainment but can also handle roles with a lot of depth, like in ‘Leaving Las Vegas’.