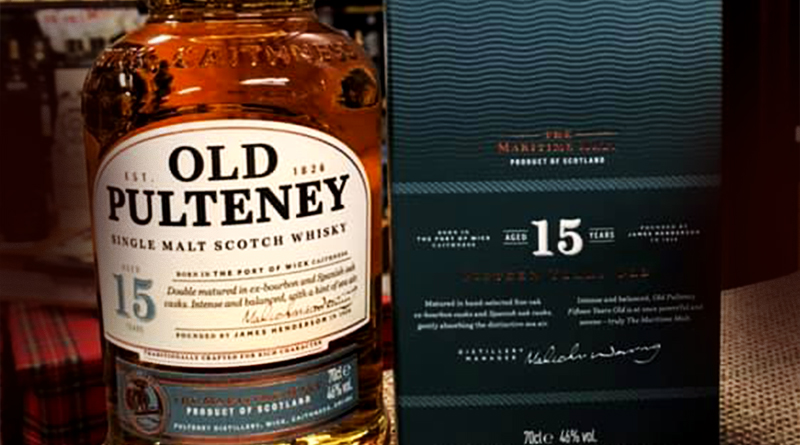 Revamps. Seems like everyone and their second cousin in the whisky industry is doing them. You have to wonder why, personally I get the feeling whisky is just not doing as good sales wise as it was a few years ago. I guess that’s what you get when too many people involved start to turn into greedy bastards. Not in the least (but not limited to) governments like the one in Belgium coming up with ridiculous alcohol taxes. Did you know that those taxes actually made them lose a ton of money instead of making more? Yet they refuse to re-evaluate.

Still, revamps or not, in the end we write about the quality of what is in the bottle, not about the packaging. Not because I don’t want to, but because as a graphic designer I would probably be unable to stop yapping about it and you’d get bored as f because you’re not here for that.

Back to the whisky, and Old Pulteney is a malt that usually does not disappoint. So, let’s see if the rebranding has any impact on the quality of the whisky. If it’s a proper Old Pulteney it should be at least pretty good, but mostly something unusual should be going on. In a good way. I also like that it’s bottled at 46% which is becoming more and more the norm for quality single malts.

Tasting with me is Werner Van den Nouwelant. Oh, the sacrifices he makes!

Citrus notes (including the zest) and shortbread. Gingerbread and caramelised biscuits (speculaas). Ok, who opened the cookie jar? Orange and sea salt. Yeah I know, Pulteney has a ‘old sailor image’ so You might think I’m just imagining this. But I’m not. Werner had it too.

Still orange and shortbread. Caramelised biscuits, nuts, citrus and other generic fruity notes if there is such a thing. Yeh I know, lazy tasting.  It feels slightly oily in a pleasant way.

A lot of zest now, but not in a bad way. Nuts, orange, peach and a lot of peppers. Nice but not what you would expect after that nose. There’s the unusual stuff already. It gets more bitter in the end. Again, not in a bad way.

This is a great product for its value, and a very decent dram overall. It would probably work slightly better in winter, but we liked it during late (Indian) summer anyway. It sure packs a punch!

You might say it’s an upgrade from the 12-year-old, although they are different enough to both be in your cabinet. I would call this a ‘whisky drinker’s whisky’. What I mean by that is that this will always satisfy, even when you’re one of those snobs who’s used to 20+ year old single casks. But it’s probably not a beginner’s whisky, not one to get someone into the hobby. Save it for their second or third session.

This whisky reminds me of: Geoffrey Rush

ARRRR. Sorrrry for the cliché, but it really does. Loads of character this dram.