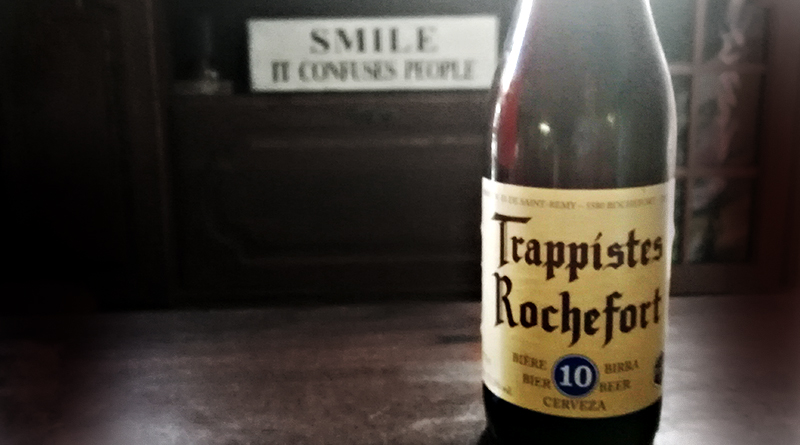 As I am writing this blogpost, our Facebook page has a poll going up on dark trappist beers that is getting quite a bit of traction. People have a choice to vote between Westmalle (which we already have notes for), Westvleteren, Rochefort 10 and Spencer. Obviously there’s more but if you keep things visual it’s more fun to limit the choices.

We originally made up tastenotes for the old Dutch blog at beproefd, but Rochefort 10 is one of those beers I almost always have a few in my fridge, so all the commotion definitely made me want to do a retaste. It should probably be noted that I Westmalle Dubbel is also one of those benchmarks I stock on a regular base.

Anyway, the original notes I did with the whisky mercenary Jürgen Vromans and Guy Verbunt, one of the owners of craft brewery ‘t Nest. If you want to know what ‘t Nest is up to, I did tastenotes on one of their beers a while back. And of course, I did a retaste before I wrote these notes.

Coffee and Mocha. Dark intense chocolate. Nutmeg and licorice. Quite a bit of herbal influences really. And a lot of power.

We really were overpowered by the Coffee and Mocha notes, but well balanced and powerful. It loses the complexity of the nose but the delivery of what is left is done with a vengeance. This is pure classic dark power.

Still Coffee and Mocha. The Dark chocolate is back. Some bitterness, like you have in chestnuts, and a hint of hazelnut to boot. So, I guess it’s more of a desert coffee than a breakfast coffee. But It leaves you wanting more for sure.

This is a great beer, and another benchmark for dark beers. Stronger than Westmalle and a different profile, yet there are similarities as well and they are all good. This beer is definitely one of the reasons Trappist beers are so highly regarded around the world.

Perhaps a tip: this beer keeps evolving in the bottle. I personally like it best (and I’m not the only one) around six to nine months after the expiration date. This is also the case for a dark Westmalle btw. Of course, taste is something personal, but I recommend you try this at least once. That is, if you can leave the bottle alone for so long. As you probably figured out by now, that is no easy task by any means.

This Beer reminds me of: Kyle MacLachlan

Agent Dale Cooper himself would approve of this ‘damn good coffee’.