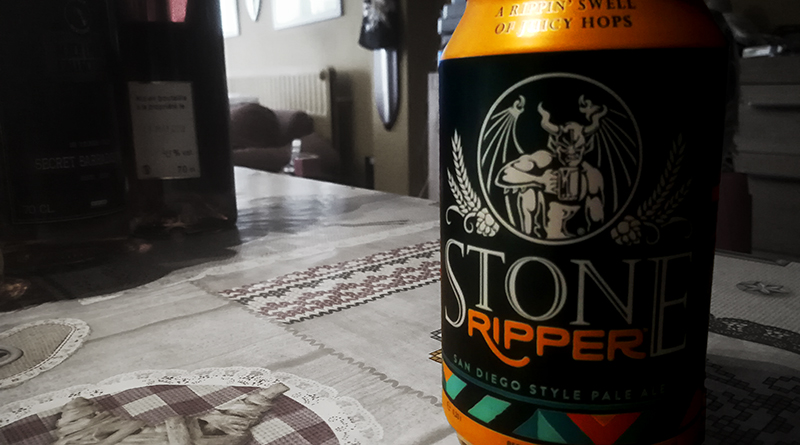 Stone Brewing originally is an American craft brewery, founded in 1996 by Greg Koch and Steve Wagner in San Diego California. Given the location you would think the name has to do with the word ‘Stoner’, but according to the website it’s much simpler. Apparently, Greg just saw the word ‘stone’ written down somewhere and it kind of stuck.

They consider themselves craft brewers and see other craft breweries as compatriots in stead of competitors, a mentality we see a lot these days. I like it, it shows a lot of passion for the craft.

In 2016 they branched out and started a brand-new brewery called Stone Brewery Berlin. I take it you get where that one is located? The beer we tasted for these tastenotes was indeed brewed in Berlin and is called the ‘Stone ripper’. I say we, as I have The Whisky Mercenary Jurgen Vromans as a tasting buddy for this.

It’s a San Diego Style Pale Ale, related to IPA you would think? Let’s find out.

Mandarin, hops, sweet apple, peach. Fruit dominates for sure. It does have a scent that’s IPA related.

Mandarin remains but drops a bit. Weirdly enough the sweet apple evolves in a more acidic green one. Overall the fruity level drops and the hops take over. Along with some host. You know, the stuff you get in Catholic Church at communion. All in all, a bit boring and bland, but it does taste fresh.

Hops again, hints of the fruits but very distant. Again, that host and some light peppers. It sparkles a bit. The finish is less boring than the taste but not that much. Again, fresh though.

All in all, this is a bit boring, although not bad and it certainly does not have any off notes. The nose promises more than the mouth and finish deliver. I would not buy this for home use, but I will gladly drink one on a hot summer day on some terrace.

This whisky reminds me of: Emily Wickersham

Fresh face and decent performance, but lacks depth. (Truth be told that could just be her role in NCIS, she seems like a nice person enough)